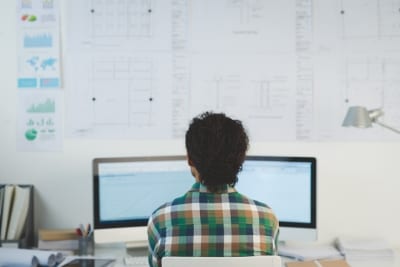 Software Developer or Database Administrator – Which One Are You?

Two of the top jobs in technology are as a software developer or as a database administrator. The two jobs are neck-in-neck when it comes to salary and job availability and are pretty equal in the overall career satisfaction of people employed in those roles.

When determining if a career as a software developer or database administrator would be right for them, it’s a good idea to think of what you like, dislike, what you excel at and your weaknesses.

Each job requires different strengths, and it’s wise to evaluate your own personality before moving into one of these roles.

A software developer is a tech-savvy pro who is able to design, test and maintain complex software. They analyze their client’s needs and design a custom solution, including writing software code.

As a software developer, also known as a programmer, there are plenty of incentives to the job.

Programmers tend to make a large paycheck with a median salary of $90,060 according to The Bureau of Labor Statistics, they don’t usually have a dress code at work, and teaching yourself new skills is possible to help advance yourself in your work, but there are many who don’t have the right personality to excel in the software development realm.

Here is what you can expect as a developer or programmer:

Database Administrators aren’t as in demand as software developers. However, their job has a higher level of job security in it.

Almost every company in all industries require some form of a database, which must be organized and managed by a database administrator according to the company’s needs.

They not only are responsible for organizing the database, but they must implement security measures and keep track of ongoing maintenance. The role requires leadership and taking control rather than waiting for something to happen or for someone else to do the job.

This is a job that someone could do in a big corporation or as an individual consultant for many companies. Many have not only earned a bachelor’s degree in computer science, but also an MIS or an MBA with a concentration on information systems.

A database administrator can expect to earn a median salary of $78,520, according to the Labor Department.

Which should you choose?

Here are some ways to decide if a job as a database administrator is the right technical job in Dallas for you:

The skills for a software developer and a database administrator are different from each other and many Dallas technical professionals fit either one description or the other. If you’re unsure which will be best for you, it’s also a good idea to talk to a technical recruiter and then use their feedback to help build a resume for the career that would be best for you.